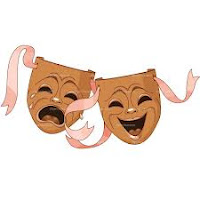 I am now beginning (well, last night) to design a television. Yes, that is correct. It is a prop for the Easter play and includes a special feature that you will just have to come and see. So, I am going to spend the majority of my time this morning working on the design.

As with this television, not everything we see is what it seem. I had a class once that suggested we, as Christians, feel it is okay to be "less honest" at times and that is okay. Last night at play practice, we were graced by our pastor's visit. This is a big deal because of some medical issues he has just been going through. However, to look at him, you would think he was perfectly fine "from the outside". I will not say he was being dishonest at all. What I will say was that he was being perceived as one with absolutely nothing wrong.

As Christ-Like people, we need to represent Christ as closely as we can.  I submit that Christ never mislead anyone by putting on a mask. However, these carnal vessels will try to justify our actions and behaviors by saying, "we need to present ourselves as witnesses of Christ". Whenever we become disingenuousness , we are wearing a mask and I would suggest "less honest".
at 6:44 AM