Drama should only be on TV...

Well, we were met with more drama yesterday and as a result, we had the opportunity to spend excellent time with my favorite two grand kids. (I only have the two).  They came over as soon as I got home from work and it was great to see them after the drama they both went through themselves just days earlier. 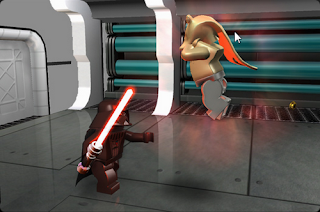 Christopher had to get some dental work done at the age of seven.  The first thing he wanted to do when he got there was to show me his silver tooth.  I asked him if he showed everyone at school and, of course, he did.  Cameron (5 yrs old) had an issue when he was sleeping.  He snores... The reality was that his tonsils and adenoids were enlarged and if he would have had any swelling, it had the potential of restricting his airflow.  So, he had them removed.  This poor little boy said his throat wasn't soar until he tried to talk.  Sufficed to say, he was rather quite and surprisingly, that was unsettling.  I felt really bad for him but I know, it was best to go through this pain to provide a healthier life.

Well, when they came over to the house they brought Lego Star Wars for the Xbox (Got to love Jar Jar Binks) and they played all evening long.  I had to make them pause the game while they eat.  Otherwise, I believe they would dwindle away from malnutrition just so they could continue playing that game.  And, not just that game but when they got tiered of that game, they had several others that played but eventually got back.
at 6:44 AM