Did you loose your horse today?


Once there was an old man who lived in a tiny village. Although poor, he was envied by all, because he owned a beautiful white horse. People offered fabulous prices for the horse, but the old man always refused. “This horse is a friend, not a possession,” he would respond. 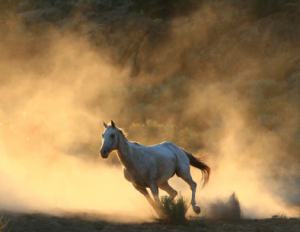 One morning the horse was not in the stable. All the villagers said, “You old fool. We told you someone would steal that beautiful horse. You could at least have gotten the money. Now the horse is gone, and you’ve been cursed with misfortune.”

The old man responded, “Perhaps. All I know is that my horse is gone; the rest I do not know. Whether it be a curse or a blessing, I can’t say.”

After fifteen days the horse returned. He hadn’t been stolen; he had run away into the forest. Not only had he returned, he had brought a dozen wild horses back with him. Once again the village people gathered around the old man and said, “You were right – what we thought was a curse was a blessing. Please forgive us.” The old man responded, “Perhaps. Once again you’ve gone too far. How do you know if this is a blessing or a curse? Unless you can see the whole story, how can you judge?” But the people could only see the obvious. The old man now had twelve additional horses that could be broken and sold for a great deal of money.

The old man had a son, an only son. He began to break the wild horses. Unfortunately, after just a few days, he fell from a horse and broke both his legs. Once again the villagers gathered around the old man and said, “You were right. The wild horses were not a blessing; they were a curse. Your only son has broken his legs and now in your old age you have no one to help you. You are poorer than ever.” But the old man said, “Perhaps. Don’t go so far. Say only that my son broke his legs. We have only a fragment of the whole story.” It so happened that a few weeks later the country went to war with a neighboring country. All the young men of the village were required to join the army. Only the son of the old man was excluded, because he had two broken legs. Once again the people gathered around, crying because there was little chance their sons would return. “You were right, old man. Your son’s accident was a blessing. Our sons are gone forever.”

The old man spoke again. “You people are always quick to jump to conclusions. Only God knows the final story.”

Found on: https://48daysblog.wordpress.com/tag/disaster/
at 6:30 AM