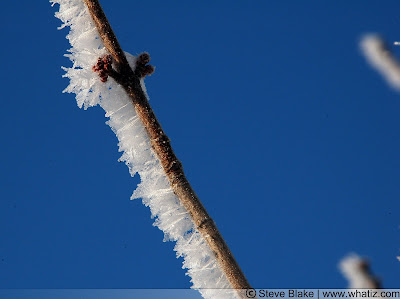 Click on picture to enlarge
This morning, I went out to take my Grandson to the bus stop when I discovered an interesting phenomena on the trees.  Apparently, we had some interesting fog last night and with the very gentle breeze and temperatures in the single digits, ice crystals began to form on the south side of all the branches.  I don't mean facing down, I mean facing due south.

I happened to catch this shot just as the sun was popping over the house across the street and the sky was this deep blue.  I did not use a polarizing lens on this shot. 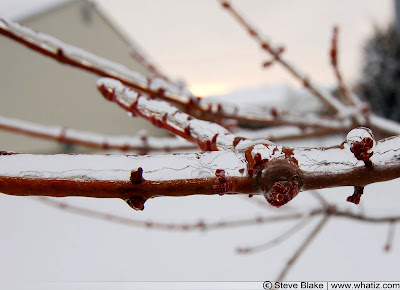 If you remember, last January we had a nice snow at around noon and subsequent ice storm.  This was an example of the ice build-up on my tree at that time.  This photo was actually the first photo posted on the "new" Whatiz blog back on March 4th.

With that said, this may have been the last time I used my brand new snow blower before I suffered a blown head gasket.  Yep, that is right.  I bought the blower last year, used it a few times and noticed I was streaming oil everywhere I went.  I guess I was a bit delinquent in investigating the cause of the this environmental disaster.  I was expecting something simple, like the drain screw was just not tightened.  It wasn't until yesterday I discovered the issue after getting it out of storage and preparing for the devastating snowfall expected last night (okay, 2 inches and I wanted to play...)  You can't blame me, I'm a guy that likes playing in the snow.

We actually had a bit of snow yesterday and I went out and shoveled two driveways and long sidewalks.  What a mistake!  I feel like an old (but good looking) man.  What I am really saying is that, "I Need My Snow Blower!"  I'm feeling like such an old guy right now.  I have been generating "old man" sound effects.  What is that all about!

Enough of that... My grandson school is actually out today due to the extreme snowfall we got last night.  I bet we got a whole one and a half INCHES.  Thats okay, it is just pre-school. but he truly loves going.  Well, more later.  Stay warm and if you must drive on these treacherous roads, be careful.