To follow-up with yesterday's post... As mentioned before, I am the first to cringe at announcing I am anything special but I will say I have to consider that worth, value, intelligence or any number of attributes is a relative measure. I know that I can honestly say that I am not smarter than a doctor... or am I? A measure of intelligence must be attached to a non-biased standard. (or as unbiased as possible). So, if a doctor was asked to de-frag a hard drive, he might schedule an operating room. I, on the other had would think that was not very smart.

So, I say all that to say, objective intelligence must be measured by a standard. In my case, (and to relate back to the prior post) was involved in a competition during my Capstone class. This "game" was actually used to compete with other teams in your class but also with those that subscribe to this competition across the world. Well, let me say that I did not go to an ivy league business school but was competing with many business schools across the world. Yes, this was a global competition and am proud to say me and Shakarri beat everyone in my class.

So, I felt I must have some knowledge in that gray matter to beat a part of the winning team. We were very blessed to recall the information necessary to be so successful. But now for the rest of the story...

One week later, I received an email from the competition committee that floored me. It basically outlined our four measures that was competing with all other colleges and universities across the world. The email started out (see below) with "Congratulations for achieving Global Top 100 performance..." WOW! I was beside myself. I went on to read and was even more amazed:

The Email I Received 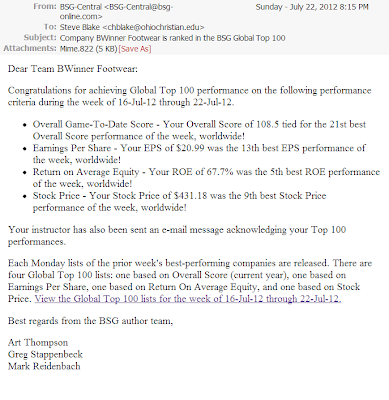