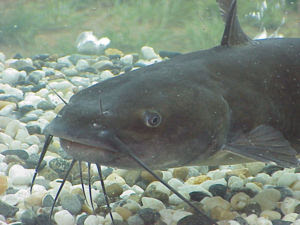 Image via Wikipedia
Yesterday evening, I had an opportunity to go fishing for catfish with Chris, Robin and boys. It was a real blast and I enjoyed it quite a bit. When we got there, we seemed to have forgotten to get bate. So, I grabbed my bass pole and headed out for bate. Robin was fishing for the bluegill and Christopher was being Christopher while Cameron was quite content (At first).
My first bass was under a pound and that quickly became bate. Chris put it on his pole and later that evening, something grabbed it. That's right, I said, "something". We never did see it because I believe it was a submarine. Nothing was going to stop whatever was on the other end of a "catfish pole". It was a bit exciting watching that bobber dancing around and knowing that the mouth that took that fish had to be big enough for a man's fist to go in without obstructions.

I wish we could have seen it but, it is what it is. That is why we call it fishing and not catching...

I caught two more bass that were larger. The second fish was about a pound or larger and the third was close to three pounds.

I also tried for the first time, throw netting. My first two tries netted a small bluegill and a little bass about three inches. Throwing this is a bit harder than it sounds. The intent is to get the net open into a complete circle just as it hit the water. You then let it sink to the bottom and then, pull in your bounty! Okay, pull in your sticks and mud.

Well, that's it for now. Have yourselves a productive day and watch for more posts at www.whatiz.com.