Hope You Had a Happy Easter 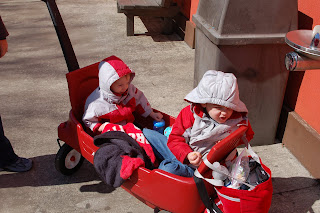 Just wanted to drop a quick note this morning.

What a weekend. The weather was not bad. We had a lot of sunshine and actually had the time to get some yard work done. On Saturday, Peggy and I had a lot of help outside with the boys. We had Christopher and Cameron both Saturday and Sunday.

On Saturday morning, we took Cameron and Christopher to the Columbus Zoo. This was the first time Cameron (1 yr) had been there and seemed to be quite amazed at the big animals. As you can tell, we had them wrapped up nice and warm and Cameron did real well in the wagon. We did not stay but an hour and a half but that was all Cameron could take for his first time. 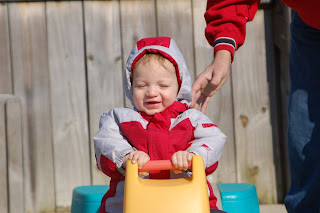 Once we got back to the house, the boys took their naps and afterwards we went outside to play. This is where Christopher helped me get all his toys out of storage and set them up for him and Cameron to play on.

While we were out there, Peggy took 54 pictures and some of them will be posted at a later date. Suffice to say, the boys had a lot of fun with Papaw. This picture shows Cameron riding down a roller coaster like ride. He had such a good time.

P. S. You can alway click on any picture to see the full resolution image.
at 6:19 AM